Working with Chainsaws and other heavy outdoor power equipment can be a strain. Hours of using machinery can become uncomfortable and working with tougher than usual materials can create a lot of vibration, causing mishaps and possible health problems.

Which is why Makita came up with the Dual Mass (M2M) system, a way to separate equipment into two effective parts, one for comfort and the other for power. The chainsaw handle is separated from the engine, bar and chain by dampening springs which absorb the engine and cutting. 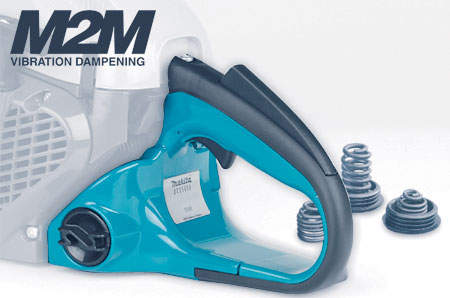 The vibrating mass, consisting of the engine, bar and chain, is isolated from the other parts of the chainsaw by vibration damper elements. The damping mass is greater and more effective than simply damping the handles.

Measurements carried out by testing have confirmed the remarkable effectiveness of the M2M system.

Effective vibration damping reduces the physical stress of working with a chainsaw. The hands remain steady when cutting and the guide bar can be guided safely and accurately.